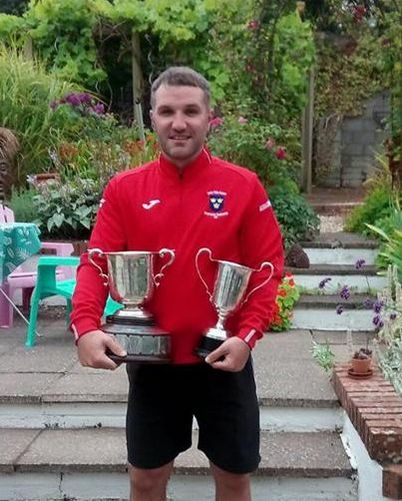 Cian Blake, Performance Director for Munster Tennis, shares his thoughts on what was a superb 2017 for Junior tennis throughout the Province
I wish to take a few moments to look back on the achievements and milestones we reached in our Junior Performance Programme throughout a successful 2017.

The year started with the first National Camp of the year hosted at Dublin City University (DCU). Munster had nine players present on the day with two players really impressing.

A week later in January we hosted the first Munster Performance Day with 98 young players attending from all over the Province. It was great for all the Satellite and Performance players to train together which made the day a huge success for all concerned.

In February we had our first international representation from the programme with Olwyn Ryan Bovey selected on the Irish under 14 team to compete in the Winter Cup in Czech Republic. Ireland finished a very credible 4th position, having lost to eventual winners Italy in the semi-finals.

Also in February we launched the Munster Performance Matchplays. This was a new initiative which gave our players matchplay opportunities throughout the year. At the end of the month we had further international success as Zach Murphy won the under 14 singles event and was runner up in the under 13 singles event at the Ten-pro global Dutch Bowl in Gendringen, Netherlands.

In March the senior and under 10 squads travelled to Leinster to train with Leinster squads in DCU and Kilkenny. Our under 10 players gained huge experience from the day and our seniors had the opportunity to train indoors to prepare for upcoming events.

The first National Matchplay of the year took place in April. The results at the event were very encouraging as Erin Perrem made it all the way to the final with Olwyn Ryan Bovey and Zach Murphy winning their events on home soil in Rushbrooke.

In a busy month, also in April we had our first tournament trip with 14 young players joining us. All the players had a fantastic time and we were lucky enough to have four finalists in the under 12, under 14 and under 16 age groups. Zach and Olwyn continued their fantastic year by claiming glory whilst Kate Gardiner and Erin Perrem both put on excellent shows to reach the finals of their events.

In June we started planning for the next term with our Munster Roadshow days. These days were used to identify Under 8, 9 and 10 talent in the different regions. We held days in Cork, Waterford, Limerick and Tipperary and they were attended by over 70 young players in total. A week later our under 12 squad hosted Leinster in Limerick for a training day where a great day was had by all.

In July we had our 2nd National Camp day in DCU. 11 Munster players trained on the day with the top Under 9s in the country.

Also in July we had our second tournament trip to the Connacht Open. In what was a fantastic week on and off the court for the players, it was a huge well done to Roisin Moore for winning the under 14 title and to Kate Gardiner who won an all Munster final against Katie Morrissey.

Later in July we received the fabulous news that Zach Murphy and Olwyn Ryan Bovey had been selected on the Irish Under 14 team for the European Championships in Czech Republic. This is one of the highest accolades a player can receive in Irish junior tennis where only the top 2 players in each country are selected. It proved a great experience for our players to play against the top players in Europe.

In August, Rushbrooke hosted the Under 14 and 18 Interprovincial Championships.

Our Under 18 team was a youthful side that learned a lot from their experience and our Under 14 team romped to victory, dropping just two matches throughout the competition. This was our first victory in the event in 16 years and our biggest points tally in recent history, with all but one of the 10 person squad being part of our Performance Programme,

Just a week after the Interprovincials, we travelled to Fitzwilliam for the Irish Junior Open where we had an incredible 14 players still competing in the event at the quarter final stage - a clear indication that the overall level in Munster is improving and that is what we are striving for!

At the end of August, Olwyn Ryan Bovey was selected to represent Ireland at the Four Nations event in Glasgow.

To kick off the new term in September, we hosted the 2nd Munster Performance Day in Limerick Lawn.  The players were put through their paces with physical screening, video analysis and matchplay. It was a fabulously supported event with over 120 of our young players present on the day.

Following on from this event, we held a Parents’ Information Evening with Garrett Barry (Provincial Performance Coordinator for Tennis Ireland) in Fota Island Resort.

With over 70 parents attending on the night, Garrett and I outlined the Munster and National pathways that are open for Munster players. With many new parents joining us in the Programme, this was an important evening as we showcased the opportunities open to all our young players.

Also in September, after strenuous training, David Nolan and Malachy O Leary were invited into the National Squad Programme in DCU.

In November, we travelled to Castlebar Tennis Club for an intensive high performance training camp with our Connacht counterparts. The camp consisted of two days of intensive training in the Castlebar indoor centre.

At the end of November our Under 9s, 10s, 12s and Senior Squad competed all over Dublin in matchplays set up by Leinster Tennis’ Stephen Nugent and I.  November also saw us introduce a 'Squad of the Week' feature on facebook which includes a small player profile on each player and their coach.

In December we had no fewer than 21 players qualify for the National Matchplays.  Considering the new entry system, this was a major achievement. Sinead Dunne travelled with the under 12s to Castlebar while I travelled with the elder age groups to Dublin.

The results were again fantastic. Olwyn Ryan Bovey won the Under 16 event, whilst Reem Gafurov and Rebecca O Mahony both performed very well to reach the finals of their respective events.

Every programme will have one, possibly two, standout players, but the statistic that pleased us most over the weekend was that 14 of our 21 players finished in the top 8 places in their respective age group.  To have two, sometimes three, of our players finishing in the top 8 of a national event is a true reflection on the strength and depth of the Programme.

Before the years’ end, we hosted the first ever Regional Cup with over 160 young players from Waterford, Cork and Limerick taking part in the events. The feedback was phenomenal and I extend huge thanks to regional coordinator Sinead Dunne who promoted and managed the three events so successfully.

It what was an incredibly successful year for Munster Performance Tennis, here are a few statistics for 2017:


Thank you to all the Munster Branch for your support throughout the year. Further thanks to our coaching team who have been fantastic all year round. Thanks to Conor Twomey for his work earlier in the year. Massive thanks to Sinead Dunne also whose continuous work is paramount to our success.

Finally, I would like to give a massive thanks to the Junior Committee. Robyn, Paul and Eddie have been amazing all year. Their support has been fantastic and I fully believe that this ground breaking year for Munster performance tennis would not have been possible without them.

In 2018 we have a lot to look forward to. We have the visit of Sam Barry early in the year, National and International Tournaments and training trips, the Munster Masters and much more!